This opening salvo isn't a cover of the Geri Halliwell song or a "No Diggity"-esque chorus, but something to do with tea: the first two lines of this, Oasis' seventh album, contain a reference to pouring yourself a cup of lady grey, which all seems a little la-di-da for a band you'd imagine are more at home with a brew of PG that you could stand a spoon up in.


Anyway, it's a solid start that'll do nothing to scare the Oasis faithful, sturdy blasts of chest-out noise, the bros G in duet on vocals, and ringing Noel Gallagher guitar lines that end in a suitably bombastic crescendo. So far, so expected. The first signs of a more adventurous Oasis appear here. The track opens with a drumbeat and a melody that, I jest not, isn't a million miles from a speeded up take on Radiohead's 'Everything In Its Right Place'.

Perhaps the normally crackers Ryan Adams had a bit of point about the album sounding like Kid A? Let's not get ahead of ourselves, though. Liam's vocal begins and a whopping chorus drops in - so it's not the eureka moment when God's white beard appears on the computer screens of the Large Hadron Collider boffins, but in Oasis terms it's something of a progression. 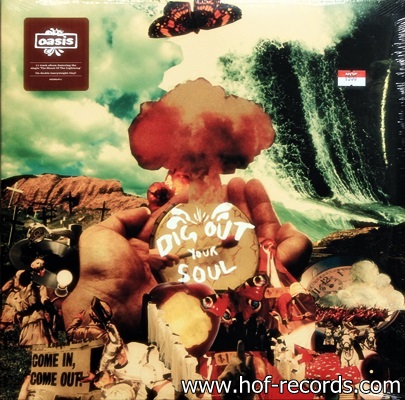 There's a fair amount of religious imagery present in the lyrics, the rapture and angels all putting in an appearance before the track fades into the sound of sea and sirens. It's a pugnacious stomper, with a cracking chorus to boot, this time with Noel Gallagher at the vocal helm.

Dig Out Your Soul

Liam's voice might sound a lot better than his Brit Awards live bellow, the five AM jogging sessions on Primrose Hill clearly getting some quality pre-rush hour London air into his lungs , but getting his older brother to do these higher parts on this one was certainly a wise move. Again, it does seem to represent a little more thought and breadth than Oasis' recent albums seem to have had - this all makes for a rather promising start.

Dive bomber sounds give way to a sharp rat-at-ating from whoever fills the drum stool on these recordings it seems unclear , before one of those battles between blugeoning guitars and Liam Gallagher's voice that marked Oasis' s arrival begins. There's a good keyboard breakdown before a fill you'd never have got from Tony McCarroll or Alan White, and we're clobbered with the full force of the track's core yet again. This sounds like it could have fitted in on Definitely Maybe or What's The Story , an assured, ballsy stodge for men in raincoats to swagger down the road to.

And then, oh dear, a ballad. By Liam.

Oasis – Dig Out Your Soul

Dedicated to John Lennon. This has been produced to within an inch of its life, the musical equivalent at that shockingly airbrushed NME cover of last week. Not really much to say more than that, except that it keeps trying to become 'A Day In The Life' and the overall effect is that of Jeff Lynne's re-imagining of the Beatles. Oasis can do two ballads - the sort for blokes to hug to after a they've had a skinful, and the sort that said blokes use to apologise to their missus the morning after, and this fits neither.

It's telling that this is the track that Liam penned in tribute to his hero John Lennon, a man more than capable of mawkish platitudes and balladeering insincerity.

Yet another shocking title what's it about, those who criticised Noel's Best Groups Ever list for its lack of female artists? You get the impression Oasis probably think that this is their take on Tom Waits. It isn't, of course, it sounds like Phil Collins 'That's All', which is an interesting way to innovate, for sure. Fucking hell, this one starts off sounding like Ride.


Part of the great shame of Andy Bell spoiling late period Ride by turning them into an audition tape for Oasis was the instant demotion of the natural guitarist to bass as soon as he joined the ranks of the Mancs. He's not credited as a songwriter here, but still, it's even got some proper shoegazing lyrics, "catch the wind that breaks the butterflies", things like that.

Noel calls this "krautpop" and says it's the song that he's been wanting to write for years. Why didn't you then, Parker? It displays Oasis' canny knack for hiding a good chorus amidst the skittish drums and strings, far better used here than the usual Oasis trick of bunging them on as an 'emotive' afterthought. Gem Archer formerly of Heavy Stereo channels George Harrison's patchouli ghoul via the sitar for this slow-burner.

No one knows exactly what compelled year-old Daniel Sullivan to bodycheck Noel into his stage monitors busting the guitarist's ribs and forcing several show cancellations in the process ; one can only hope he wasn't so much a psychopath looking to off a celebrity as a concerned fan hoping to shake some life into his favorite band and literally push them back to the underdog position that inspired their most enduring anthems.

But we'll have to wait another album to see if the incident instills in Noel a newfound hunger and fire; for now we're stuck with Dig Out Your Soul , which like every Oasis album from 's Be Here Now onward, makes cursory gestures toward making the band's mod-rock more modernist, before reverting back to the same ol', same ol'.

The precipitous quality decline in Oasis' output since Be Here Now -- whose increasingly uninspired successors make it seem not so bad in retrospect-- can be measured two ways: the ballads got more overbearing "Little by Little", "Where Did It All Go Wrong? At the very least, Dig Out Your Soul makes inroads to redressing both issues: the lilting sea shanty "Falling Down" is Noel's most graceful balladic turn since B-side "The Masterplan", while lead single "The Shock of the Lightning" is exactly the sort of tune Oasis needs more of to stave off impending geezerdom, a hard-driving strobe-lit rocker-- complete with a rejuvenating vocal turn from Liam and a suitably Keith Moon-like drum solo from moonlighting Who drummer Zak Starkey.

The song's brisk velocity makes you wonder why Noel Gallagher doesn't write in this mode more often, as it still seems to come easy to him; as usual, he runs into trouble when he tries to affix weighty themes to flimsy songs. Two songs in a row talk about "the rapture," but don't look here for any insights about the political dimensions of contemporary evangelicalism: While "The Turning" at least tries to back up its vague love-as-religious-experience imagery with some suitably stormy acid-rocked intensity guided by Starkey's loose rhythm, a backing choir, and a repeated single-note piano stab , the Noel-sung "Waiting for the Rapture" is just a limpid cock-rock stomp speckled with the usual Beatleisms "revolution in her head" and Lennon lifts specifically, the guitar riff to "Cold Turkey".

BBC - Music - Review of Oasis - Dig Out Your Soul

Bassist Andy Bell likewise contributes the standard-issue "Nature of Reality", a pub-rock slosh that never delivers on the promise suggested by its "Helter Skelter" intro. Guitarist Gem Archer fares better with his songwriting ration, "To Be Where There's Life", which at least hitches its Beatles reference of choice the wiggy sitar drones of "Tomorrow Never Knows" onto a more exploratory psych-funk rhythm, coming up with the sort of hypno-pop groover the Verve forgot to write for their recent album.

But while you'd think a band seven albums into its career would outgrow its formative influences or at least try to , the Gallaghers' Fab Four embrace feels more suffocating than ever, with Liam's "I'm Outta Time" pushing Oasis to new depths of Lennon grave-robbing: just when you're about to forgive the schmaltzy "Free as a Bird"-style arrangement and the cribbed piano chords from "Jealous Guy", they drop an actual Lennon interview sample in the fade-out because naming his kid after the guy clearly wasn't tribute enough.